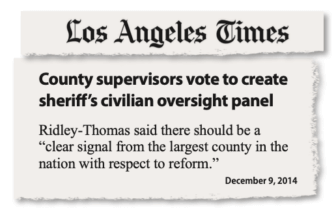 As a community organizer, civil rights activist, educator and elected leader, Mark Ridley-Thomas has been at the forefront of the movement to hold law enforcement agencies accountable for excessive use of force, police violence, and police brutality. He stood up to Police Chief Daryl Gates, and later worked with Chief Bill Bratton to implement reforms. Ridley-Thomas has always sought to improve training and was one of the first and strongest advocates of community-based policing.

In 2010 Ridley-Thomas began the effort to establish civilian oversight of the Sheriff’s Department, but fell short. He challenged the corrupt leadership of the Sheriff’s Department again in 2013, organized a strong community coalition — and this time he succeeded with the historic establishment of the civilian oversight commission. Since then, incidents involving use of force in jails have reduced dramatically, and Mark continues to lead the effort to create a criminal justice system that guarantees public safety, holds people accountable for breaking the law, but also provides humane treatment.