“I met Mark Ridley-Thomas in the 1980s, when there were great tensions between local police agencies and the public. Mark was finishing his Ph.D., teaching at the college level, and emerging as a civil rights leader. 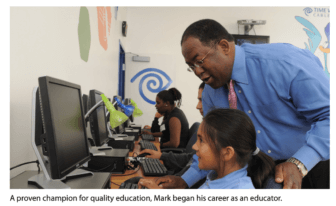 “I was a member of the board of the Los Angeles SCLC, the historic civil rights organization founded by Martin Luther King, Jr. — and we hired him as our Executive Director. We saw something special in Mark Ridley-Thomas, particularly the way he built coalitions with people from all communities and ethnicities. This is a practice that Mark has continued throughout his career. 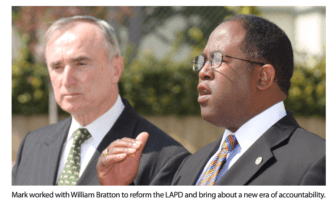 “As an elected leader in Los Angeles, nobody has done more to help local schools and academic institutions, create actual jobs and job training opportunities, and save our emergency hospital system from collapse. He even co-authored the groundbreaking California Global Warming Solutions Act of 2006.

“And Mark did it by building coalitions and community engagement, and his Neighborhood Empowerment Congress has served as a model for cities across the nation. 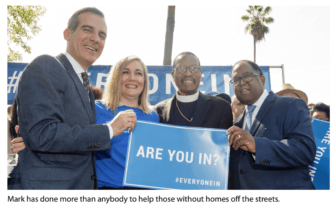 “Mark Ridley-Thomas stepped forward, when so many others were silent, to tackle the homelessness crisis. Thanks to his leadership, more than 35,000 people have been moved off the streets and into interim housing — and 18,000 into permanent housing.

“Los Angeles is at a turning point. We need leaders like Mark, who can bring people together to work for change.”