Not since southern segregationists blocked the entryways to local city halls has the right to vote been under such a flagrant attack. Not only has President Donald Trump threatened to invalidate any result in the November election that doesn’t return him to the Oval Office, he now is openly mulling plans to sabotage the functions of the U.S. Post office — purely to thwart voting by mail. 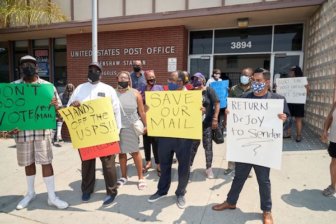 The President, who voted by mail in the primary and intends to do so again this fall, has railed against the longstanding tradition even as COVID-19 requires the nation to practice social distancing. Trump continues to create confusion around absentee voting and vote by mail, despite the fact that these are two terms for the same process.

Additionally, his administration is trying to sabotage the U.S. election by denying the Postal Service funding it needs to process voter’s ballots. Trump mega-donor and Postmaster General Louis DeJoy reassured the public that the Post Office will deliver ballots in a timely manner, but his actions leave the issue in doubt.

Given this dire situation, Supervisor Mark Ridley-Thomas brought together some of Los Angeles’ leading workers’ rights and civic organizations for a protest at the Tom Bradley Post Office on Crenshaw Boulevard. 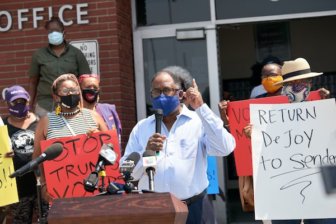 “We are not going to stand by and let this happen,” the Supervisor said. “It is unimaginable that we would just recently say our last goodbyes to John Lewis and then do nothing while the right to vote – the cause for which he risked his life on the Edmund Pettus Bridge – is attacked in this way.”

Gonzalez, who also addressed the crowd, called on supporters to vote out the president, waving papers that he called Trump’s “change of address” kit.

The Supervisor also took the opportunity to note that he would push Los Angeles County to join California Atty. Gen. Xavier Becerra and other states suing Trump over cutbacks to the Post Office.

The Supervisor stated, “We will do what it takes to preserve the right to vote by mail, but let me say this: get ready to vote. Make a plan. When early voting begins, that’s the time to vote; avoid the lines, and even drop off your ballot in person if you can. We’ve been through this before, so we know what to do.”

“And we know that if we stand together, we will indeed overcome.”