The day Mark Ridley-Thomas formally kicked off his campaign in December, he canvassed a neighborhood, going door-to-door to introduce himself, meet residents and ask for their support. Many voters at that time asked him to name the issues that will be his top priorities should he become the Councilmember for District 10. 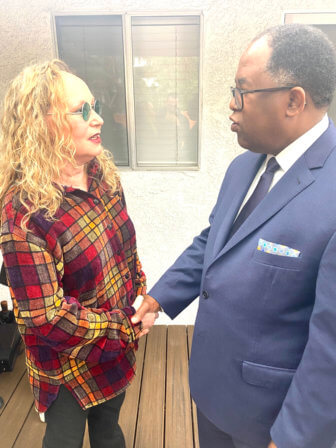 But when MRT knocked on Ana Lambert’s Pico-Robertson neighborhood home on that Saturday afternoon and introduced himself, the professor of life sciences at Harbor College made sure to communicate her priorities to him.

“Come with me, come with me right now and I’ll show you what I want you to work on,” Lambert said, leaving her home and guiding the Supervisor across the street and around the corner to a nearby blighted area.

“This is where there’s drug dealing, there’s trash, there’s needles, and this is where we have been trying and trying to get things cleaned up. So if you want my vote, this is what I want you to work on,” she said.

Walking and talking, Lambert, who holds a Ph.D in biology from UCLA and MRT found they have some shared aspirations for the district. The Supervisor has been a champion of the burgeoning bioscience industry, and if elected to the council, plans to work to locate bioscience incubators in the district. 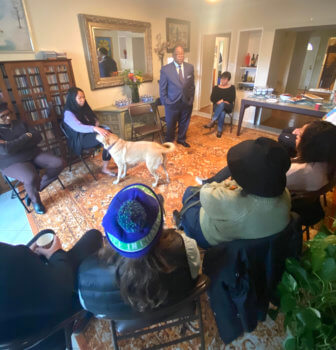 After her meeting with MRT, Lambert, who is active in community affairs, set about arranging for her neighbors to meet the candidate, and they gathered at the home she shares with husband Sherman for a conversation.

While homelessness, the lack of affordable housing and other major issues were mentioned as concerns, perhaps even more prominent were the bread-and-butter issues of traffic congestion on La Cienega Blvd., the local impact of climate change, and the noise and nuisance of new flight patterns to LAX, wending their way over the neighborhood.

Many of the problems facing the neighborhood, the 10th District and the City of Los Angeles as a whole, are systemic, MRT explained, and require a change in governmental policy that empowers communities.

“Residents will have more power to affect homelessness, affordable housing, density and even traffic concerns if community redevelopment agencies are reinstated.” he said.

“These increases in homelessness and corresponding reductions in affordable housing we’ve seen in past years are not happening in a vacuum. In large part they are the result of reduced local control, and if I return to the council, I will push with all my might to get it back.”