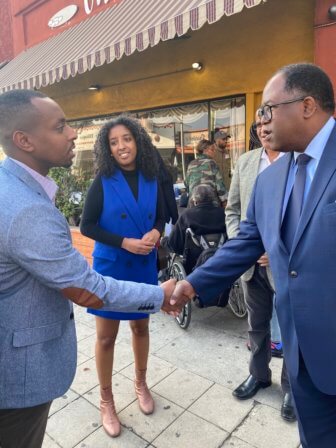 With back-to-back question-and-answer forums over the weekend, the Campaign for CD10 is in full swing.

The Supervisor participated in both of the first forums of the City Council campaign season — the primary is on March 3 — one hosted by a newly-minted civic organization and the other by one of the City’s most established democratic organizations.

The Ethiopian Democratic Club of L.A., which is seeking to boost civic engagement in the Ethiopian American community, hosted all five candidates for CD10 at Messob Restaurant in Little Ethiopia.

The second forum, hosted by the League of Women Voters of L.A., the NAACP of Beverly Hills and other sponsors, took place at Holman United Methodist Church.

There were some similarities between the two events: questions from the moderators and the audiences dwelt on the City’s homeless and affordable housing crises, community engagement, the arts and economic opportunity.

MRT, who has served as a City Council member, Assembly member, State Senator and County Supervisor, emphasized his ability to “get things done,” pointing to a track record that includes the development of the Martin Luther King Jr. Community Hospital, creation of the 13-mile Park-to-Playa trail, hundreds of affordable housing units and most recently, his sponsorship of Measure H, the County measure that has housed more than 35,000 formerly homeless people.

The Ethiopian Democratic Club, however, also asked candidates which one had a fully developed plan for their community.

MRT answered that while eager to work with them, a grassroots style, not top-down management, was more his style.

“Community engagement is at the core of my work,” he said, “and working together is how to make this community be a model for so many other diverse communities in our City.”

At both forums, attendees asked about candidates’ approach to economic opportunity and job creation.

Although he has created hundreds of jobs in the 10th District and especially in communities of color through policies at the County and the Metropolitan Transportation Authority, of particular interest to him is creating employment opportunities for formerly incarcerated people, MRT said.

“Creating job opportunities and making every effort to expunge records wherever possible, is hugely important,” he said. “It’s the record that is often a barrier to employment, and removing that opens up all kinds of opportunities for people who deserve a second chance.”

In closing, after about two hours of wide-ranging proposals at each event, MRT thanked the hosts and listeners, and said:

“I am running to be your City Councilman because there is work to do, and I have more than just ideas; I have the experience, the know-how and the energy to get the results you so richly deserve. And with that, I’d be honored to have your vote.” 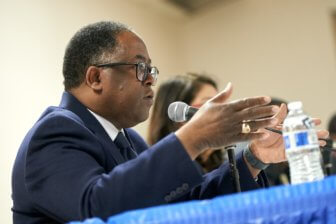