Homelessness, the dearth of affordable housing and the importance of civic engagement were main topics of discussion when neighbors, friends and community leaders gathered for an informal question-and-answer session with Mark Ridley-Thomas at the West Adams home of Kurt and Ann Petersen. 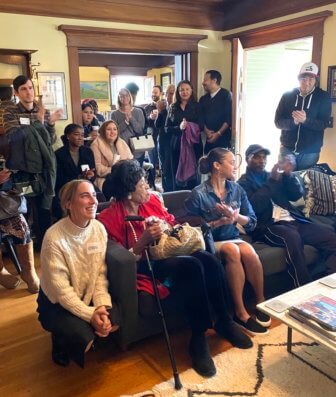 If you want to know what Mark Ridley-Thomas can do, Petersen said, consider the Martin Luther King Jr. Community Hospital. The hospital was built through MRT’s leadership despite facing both staunch opposition and the discouraged disinterest of naysayers. He added that today, the hospital has a higher patient safety rating than Cedars-Sinai.

“MLK, in my view, is the example of MRT’s bold vision, unique talents and boundless drive”, Peterson said.
Those qualities, and a proven track record, are more necessary than ever before.

“Today we have seemingly intractable and impossible problems in the city – problems of housing and getting good jobs in our communities. But it’s my belief he will use and exercise all those skills, traits and passion to get things done for our community and our city,” he said.

Almost immediately, listeners wanted to know the difference between how MRT would approach the homeless crisis as City Councilman versus as a County Supervisor.

Although the County has more resources and tools, Ridley-Thomas said, supervisors’ duties are vast, and their attention is necessarily dispersed to solve a variety of issues facing the 2 million people in their districts as well as the 10 million in the entire county.

His top priority, MRT said, will be homelessness.

“There is no challenge more fundamental than that in the city of Los Angeles.” 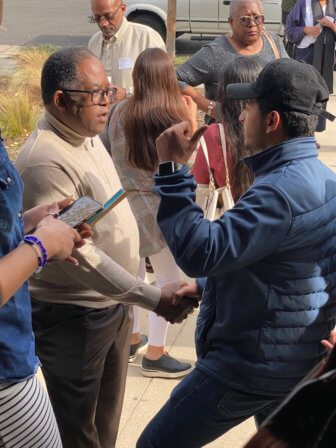 “How did it get so bad? Neither the City nor the County was making the necessary investments with regard to prevention. And then came the tsunami.”

It is time to approach the problem as if it were a natural disaster.

“You’ll hear me pushing for a Comprehensive Crisis Response,” he said “AKA state of emergency. We need a more rapid and urgent response.”

Shelters definitely need to be in the mix of solutions, he said. Opponents to shelters cite those in New York City, often derided as unsafe and unsanitary facilities that “warehouse” homeless people.

“Some say no —we don’t want to be like New York. But we don’t have to be. We can do it better and smarter, and if we don’t, shame on us.”

He also emphasized that criminalizing homelessness would be both immoral and ineffective.

Several questioners wanted reassurance that while he’s working on homelessness and other issues, MRT would engage and collaborate with neighborhood associations, block clubs and grassroots organizations.

With a smile, Ridley-Thomas noted that civic engagement is at the very core of his philosophy and work as an elected official.

In fact, in 1992, when he served on the City Council, MRT founded the Empowerment Congress, a enduring model of civic engagement that brings together neighborhood groups, religious institutions, nonprofit organizations, community leaders and others in a model of participatory government.

Indeed, the Empowerment Congress, which celebrates its 28th annual summit on January 18th, is widely regarded as the precursor to the City of Los Angeles’ Neighborhood Councils. Today it has evolved to serve over 2 million residents in the Second Supervisorial District.

“I’m all about building community investment and engagement, so I can’t imagine we wouldn’t have a good time working together,” MRT said.

Making special appearance to support the Supervisor, as she has since the beginning of his career, was former Congresswoman Diane Watson.

Watson acknowledged a warm round of applause but returned the focus of to the impending city council race and her support for MRT.

“I’ve known Mark for many years now, and I’ve watched him grow into the outstanding leader that he is today,” Watson said. “That’s why I’m here today. We need his leadership now more than we ever have.”